Alexandra Cannon | This Side of Paradise
21853
post-template-default,single,single-post,postid-21853,single-format-standard,ajax_fade,page_not_loaded,,select-theme-ver-1.8,wpb-js-composer js-comp-ver-4.3.5,vc_responsive

This Side of Paradise

This Side of Paradise

Fitzgerald is tough to write about because he’s his own league. Might as well admit that right now. His writing is often so beyond imitation that at first blush, it’s easy to make the knee-jerk conclusion that there isn’t anything to take home. In some respects, that’s still how I feel about Gatsby and if I I told you I read that novel ten times, I’d be low.

But I’d never read This Side of Paradise before. It was published in 1920, five years before The Great Gatsby, and there are unmistakable tremors of that coming masterpiece in this earlier work. The novel’s protagonist, Amory Blaine, can easily be a case study for an early Nick Carraway.

Like The Great Gatsby, This Side of Paradise is concerned with youth, but more specifically the adolescence and young adulthood of Amory Blaine, a wealthy American boy whose trajectory form boarding school through into an Ivy League education at Princeton isn’t exactly relatable for many readers (including this one). But the amazing thing is that those experiences are only the backdrop of a much more fundamentally relatable story. Amory’s emotional evolution and youthful firsts are raw and human and these keep the story accessible despite whatever huge experiential gaps there may be between the reader and Amory.

And of course there’s the language. Fitzgerald can make anyone feel Amory’s nostalgia for the Princeton of his youth, just as much as he can make you feel that youth itself:

He liked knowing that Gothic architecture, wth its upward trend, was peculiarly appropriate to universities, and the idea became personal to him.  The silent stretch of green, the quiet halls with an occasional late-burning scholastic light held his imagination in a strong grasp, and the chastity of the spire became a symbol of this perception…The college dreamed on—awake. He felt a nervous excitement that might have been the very throb of its slow heart.  It was a stream where he was to throw a stone whose faint ripple would be vanishing almost as it left his hand.  As yet he had given nothing, he had taken nothing. (42) 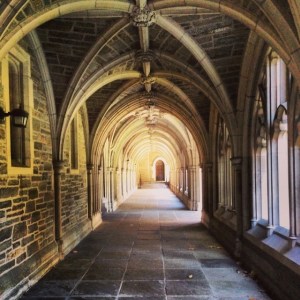 Most of Amory’s life, even the moments of genuine despair, are shot through the golden lens of nostalgia. I think this is made slightly easier through the structure of the novel, which is more like a series of connected vignettes than it is chronological chapters. Most of the time, the author is careful not to go down paths too dark—Amory serves in the military during the First World War, where some of his friends are killed. The reader is shown none of this, not a glimmer. In fact, all of what one can only assume was a singularly traumatic and horrifying experience —particularly for someone like Amory, who self-identifies as sensitive— is glossed over and remembered in vague conversation years after the fact.

In a way, this strikes a familiar chord. I think everyone has a tendency to hold the memory of our worst moments at arm’s length. One of the ways this can be accomplished is by recalling a bad day’s proximity to better days. And in memory, proximity is elastic. Who doesn’t know how to jump from the first day of school to the last day of university, from a loved one’s funeral to an evening spent laughing with her?

There is one glaring exception to the nostalgia-proximity rule in This Side of Paradise, though, and that is heartbreak. When Amory experiences his first love, the reader feels and sees everything: the perfect, blue-sky-breezy-summer American romance you’d imagine Gatsby and Daisy had. Young and in love, everything matters to Amory and he denies himself no experience. Perhaps, then, it’s because losing his first love marks the first moment in which parts of Amory, who until that point is alive to all experience, begin to freeze. Against a backdrop of so much conventional 1920s elegance and beauty, a little rawness, a little desperation, is weirdly satisfying and thrown into sharp focus. The loss of this first real love marks a startling downward trend in Amory’s life.

Another weirdly delightful and completely unexpected side story is one bizarre evening in which, in a stressful and confusing time in his life, the devil begins to follow Amory around for a brief period. The moment is as shocking as it sounds, especially since I didn’t think Fitzgerald had that kind of morbid verve in him. Nowhere else in the story is there any magical realism, and for as attached to Amory as the narration is, there is something in the language that suggests that whether or not Amory is literally visited by the devil, he certainly believes he is, and within the context of the novel, there comes a point where the two are effectually the same thing. And that scene is actually frightening because it is so vivid and so other.

A brief bit of research didn’t reveal much in the way of literary criticism or conjecture in terms of what this apparition is meant to say in the context of Amory’s life outside of perhaps acting as a signifier that he is under extreme duress and life is about to become markedly more difficult, but I wonder if that’s really all there is to it. For me, Fitzgerald is often steadfast in his brilliance, but not always straightforward. Certain scenes that seem at the outset unimportant or at best anomalies which in  time or context will find their place in the complexity of the background sometimes stay with you, and in retrospect are pivotal moments. This scene was unexpected and chilling and, once over, never revisited in the novel, which has the (intended) effect of staying with the reader so much the better. It certainly made me ask which side of Paradise this is meant to be. Clearly there is more one.

Lifting a quote from these scenes won’t do them justice. You have to read it for yourself. But I did us both the favor by looking up what 14th-Century shoes looked like (you’ll want to know): 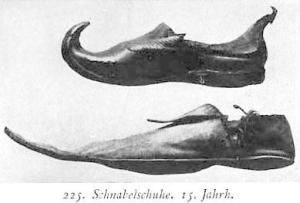 It’s worth a mention that Amory befriends a priest a couple decades his senior —a very dear friend of his mother’s and something of a kindred spirit— the priest seems to believe that Amory will eventually find his calling within the Church. We never find out.

From a what-I-learned-about-writing perspective, This Side of Paradise demonstrates the power of vignettes, how a full story can be told in only a few scenes. It’s an often-overlooked art form, living as it does somewhere between poetry and prose, but in its nebulous milieu is a freedom to bend and break rules that perhaps otherwise would have to be followed. Where else is the devil going to fit, if this were straight prose or an epic poem? It would feel jarring, something the author is trying to force into circumstances where it doesn’t quite belong. As it is, that scene is still striking, but manages not to violate or stretch reality in the novel.

Amory also has a writer friend at University, a poet called Tom. In a passionate outpouring of all his collegiate world weariness and despair at the writing ability of his peers, Tom quips: “Every author ought to write every book as if he were going to be beheaded the day he finished it” (157). While I struggle with absolutes in terms of advice, the thought is a nice one. Write every sentence like it’s going to be the last one (obviously Tom doesn’t mean ‘stave off death by never finishing your novel’). Writing like you’re dying isn’t practical advice, but it isn’t totally worth dismissing, either. It’s good to be reminded of how important it is to always push yourself to do better than you did the last time, to be unafraid of pushing the art. 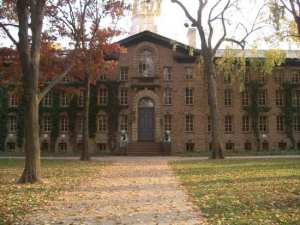 The most vital reminder for me, though, is the huge importance of allowing moments of beauty to be beautiful. I’m talking about real beauty, which is a feeling, not an appearance. I think a lot of people interpret any kind of lovely moment or exchange to be either cheap or airy-fairy, but when it’s earned, it’s justified. All in all, Amory has an unapologetically beautiful youth. I think most of us have, not because of money or being lucky enough to afford college, but because of the simple fact that youth is beautiful. It represents possibility, newness, hope. It’s okay and not at all cheap to let the reader feel that and remember. It’s okay to hold on to that overarching loveliness. The devil is in the details either way.

All quotes are from This Side of Paradise and Other Classic Works published in 2015 by Barnes & Noble. It’s a hardback, and a bit pricier than most editions I recommend, but this one is worth it.