By a happy accident, I wound up reading Naked Lunch in the way I think the author intended it to be read, which is to say entirely unprepared for what it is. This was my fault, of course: I was researching the Beat generation and had read some Ginsberg and Kerouac. I thought Burroughs’s art would fall somewhere in line with what I already knew.

First of all, by the author’s own admission, Naked Lunch is not a novel. It isn’t poetry. It isn’t a collection of short stories, either. It’s more like a set of vignettes, thematically connected, and in theory a reader could open to any random section and have roughly the same notion of what is going on as someone who has been reading it in order.

If there is one traceable thread of story woven through the vignettes, it concerns a heroin addict named William Lee, whose hunt for his next fix and attempts to duck the authorities lead him from New York to Cuernavaca and Taxco, to Tangier and finally the dystopian, government-controlled “Interzone.” But in the main, and in all of these places, the primary action during the vignettes include drug usage (in particular heroin, known as “junk,”) during or preceding incredibly graphic sex (mainly among men), and with it, decay of the body and a nightmarish parade of human rights violations, most commonly rape and murder. I lost count of how many instances there are. 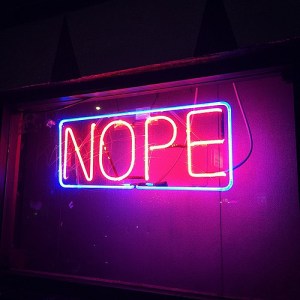 This is the light that goes on when you first ask yourself “should I really blog about Naked Lunch?”

I’m not easily rattled when it comes to fiction, but for the first third of the novel, I confess there were moments I wasn’t sure I would make it all the way through. There are scenes in this book that would disturb anyone. I kept flipping to the back cover to look at the photograph of Burroughs’s severe, unsmiling face and asked Why do this? Why write this?

These questions helped me find a way to interact with the text. Instead of accepting that I was embarking on a couple hundred pages of limning sex and murder through the lens of every imaginable variety and class of narcotics, I decided to trust that the author had an underlying intention, and I started to look for it.

Initially, I had the feeling that the way these disturbing scenes melted into each other (and the subject matter itself) was indicative of some form of creative exorcism, like Burroughs felt the literary world muzzled itself too much, imposed too many rules to follow, from cultural subject matter limitations to the confines of how a story is meant to be structured, and now he was lashing out. To a degree, that’s true. There is a systematic and undeniable violation of just about every rule there is in the canon of storytelling. But this could be accomplished with any one chapter; if Burroughs just wanted to give the literary world the finger, he could have done so with resounding success in fifteen pages.

Then, in the middle of a particularly wrenching scene of an aging addict shooting up, the narrator suddenly asks “How many years threaded on a needle of junk?” (73). The question is poetic, and lucid. It doesn’t feel like Lee is asking it, since there is no “I” in the scene. It certainly isn’t the addict speaking. Instead, it seems like the author is asking. Something about it rings a little too true. And as it turns out, the author confesses in two postscripts he refers to as a deposition and an atrophied preface entitled “WOULDN’T YOU?”  that he was a heroin addict for fifteen years. Aha. During part of this time, he wrote Naked Lunch, along with Junky and Queer. By his own admission, he was under the influence for much of that time, but spent years editing. But I didn’t read about all that until the end. All I had at the moment was the strong sense that the work was probably written by someone who knew addiction.

Again though, resisting the confines of literary tradition, and putting the reader into the mind of an addict didn’t seem to cover the entirety of the point, inasmuch as there is one, of Naked Lunch. As I was contemplating this, I finally noticed a pattern and felt like a total idiot for not putting it together sooner.

Naked Lunch was written in the 1950s, and it’s no secret that America behaved unconscionably toward the LGBTQ+ community during this time of McCarthyism and xenophobia. The way gay men are portrayed in the work seems to mirror the ridiculous fears about anyone who isn’t heterosexual that were assimilated into the American consciousness. But the government in the Interzone is actually worse than the worst of these homophobic renderings. It becomes clear the work is pointing directly at 1950s America and accusing:

you are worse than your worst fears. 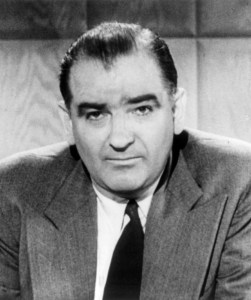 More layers become clear. Burroughs even seems to take on patriarchy at one point, referring the image of a wizened, elderly professor as “some old white-haired fuck” who:

staggers out to give us the benefits of his ripe idiocy. Are we never to be free of this grey-beard loon lurking on every mountain top in Tibet, subject to drag himself out of a hut in the Amazon, waylay one in the Bowery? ‘I’ve been expecting you, my son…Life is a school where every pupil must learn a different lesson. And now I will unlock my Word Hoard…’ (97).

This image of the wise, powerful, law-abiding, law-creating patriarch is the enemy throughout. He is personified in Dr. Benway, and in the depiction of all that Dr. Benway and those like him fear. Very clever.  After this realization,I was able to better appreciate some of the humor Burroughs employs between wincing and cringing.

So. Could I read Burroughs every day? Nope. But I do respect what he accomplished as a writer, and as someone who contributed to pushing literature as an art (and inspiring many postmodern writers in the process), not to mention the attention he fearlessly drew to the hypocrisy of a “melting pot” nation that tried to turn away from diversity.

I’m certainly never going to flirt with substance abuse just to see what happens in my imagination, so when I started reading Naked Lunch, I decided that meant it was unlikely I would take away anything worthwhile as a writer. It was an unfair prejudice, and I was wrong to think it. While I’m still staunchly anti-heroin, by the end of the book it did occur to me that I’d never once attempted to break every (storytelling) rule I knew before. Stream of consciousness, yes, of course, but never a true free-for-all. So I turned to a blank page and after several false starts, was able to venture out of the cage, image tumbling over image.

It was actually really freeing, and although totally devoid of violence, it was more image laden and image centric than the way I normally write. It helped me put myself more viscerally in a given moment, which I think is a skill that is particularly powerful when narrating in the present tense. It felt closer to the headspace I have to be in to write poetry instead of prose.

The exercise was also much harder than I thought it would be. It meant surrendering a certain amount of control. And as Burroughs himself observes, “Americans have a special horror of giving up control, of letting things happen in their own way without interference” (178). Food for thought.

All of the page references from this blog entry can be found in Naked Lunch: The Restored Text, which was edited by James Grauerholz and Barry Miles (Grove Press, 2001). It includes letters, essays, and outtakes that really enhance an understanding and appreciation of the text, including an index of all of the drugs mentioned (there are enough to rival Woodstock ’69).