A Brief History of Seven Killings

A Brief History of Seven Killings

I’ll start by confirming what you probably already heard: page-wise, it isn’t brief. The paperback version clocks in at just south of 700 pages. But unlike other reviews you might have read, I don’t share the sentiment that this is a huge problem. I interpret Marlon James’s use of the word “brief” to be less about how, in documenting all that leads up to the seven murders referenced in the title, 700ish pages is relatively brief, and more as an acknowledgement that given the ambitious scope of the novel, a seemingly excessive number of pages is still, in that sense, very brief.

In “Anecdote of the Jar,” Wallace Stevens places a jar “in” Tennessee, and describes how the presence of that jar becomes the lens through which the surrounding wilderness is seen, and the vehicle through which it is ordered.  In A Brief History of Seven Killings, Bob Marley is the jar, and the surrounding wilderness is Jamaica in an extremely violent era of political upheaval in the 1970s and 80s.

The story is told through multiple viewpoints, equally poignant and tragic, from the dons who run the ghettos of Kingston, to the teenage boys tapped to attempt the famous failed assassination of Marley in his home, to CIA involvement in the gang wars (very heady accusations about American government-funded gun running to combat what was seen as an opening for communism to spread to Jamaica), to a music journalist who smells a much bigger story, to a lost young woman running from the horrors of her past.  Even the dead talk.  They all talk about Bob Marley, known to all as “The Singer,” and the way they think of 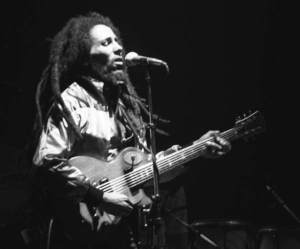 Marley performing at in Zurich, 1980

him reveals their own stories and truths.  The result is a startling and violent look into 70s and 80s Jamaica, as well as a couple forays into the middle of the first American crack epidemic. It is simultaneously sweeping and deep, and expertly told, and it seamlessly culminates in a senseless massacre in a New York crack house (these are the seven killings, not to be confused with the dozen other killings in the novel).

I’m fascinated by James’s fluency in switching from voice to voice to tell a complete story, but I don’t know how much I can really take away as a writer, except to remember that this is a shining example of what it looks like when it’s done right. A writer runs an enormous risk when jumping around from voice to voice —a risk that is compounded for every voice added— for a variety of reasons, the most common of which I think is that it is highly likely that one character will be much better rendered and more interesting than the others. That phenomenon can occur for a variety of reasons, too. But it doesn’t happen here, because each perspective is 100% necessary. It isn’t a cunning trick. And for me, that’s only half the reason it works.

The other half is that, addition to needing multiple voices to tell the full story, James has an astounding amount of empathy, possibly more than any writer I’ve ever read. It’s like Tolstoy. It is evident that he took great time and care in feeling genuinely and fully for each character. Nothing is peripheral. No one lacks dimension. Even those characters who commit the most heinous, unforgivable crimes (which the reader sees many times over and in abundant detail), are portrayed in a very human light, so much so that I was blown away when I realized I could understand and pity even the worst of the worst.

In a similar vein, I learned that the best way to build this kind of empathy for the reader, (and possibly even in the mind and heart of the writer), is to never flinch or look away from anything, which is no small achievement. James shows the reader everything, in wrenching detail. He puts you in the frantic, frightened mind of child who is buried alive and suffocates to death, he take you through Marley’s death from cancer, you see through the eyes of victims, their abusers, addicts, and outsiders, so much so that it becomes a nightmarish chorus of violence, but never a cacophony: you hear every note. You are denied the luxury of one horror eclipsing another, of certain terrors overriding others.  The atrocities may be familiar, but the pain is always new. Yet woven through all that violence and death is a single, tenuous thread of hope, more prevalent at some times than others, maybe, but always visible. And as for the Singer—well, Alex Pierce, the fictional Rolling Stones journalist says it best:

…I am slowly realizing that even though the Singer is the center of the story that it isn’t really his story. Like there’s a version of this story that’s not really about him, but about the people around him, the ones who come and go that might actually provide a bigger picture… (221).

In “Anecdote of the Jar,” Stevens talks about the jar providing order to the wilderness. It is more the idea and the legend of the Singer than the man himself that is the vessel which fosters hope in places of untenable brutality. In the end, it isn’t about him. It’s about what he means. I’ll leave you with one more, from the ghost of Sir Arthur George Jennings:

…in another city, another valley, another ghetto, another slum, another favela, another township, another intifada, another war, another birth, somebody is singing the Redemption Song, as if the Singer wrote it for no other reason but for this sufferah to sing, shout, whisper, weep, bawl, and scream right here, right now (601).

All quotes from from the paperback version of the novel, published by Riverhead Books, 2014.